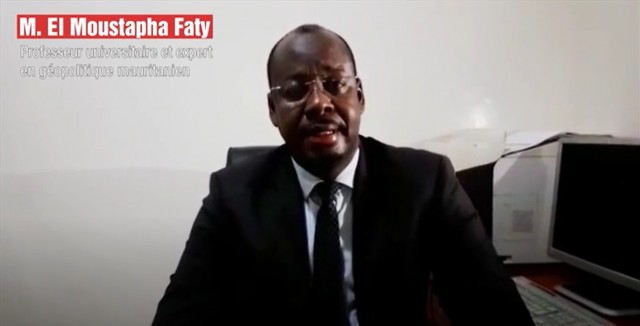 Dr. Mustapha Faty, a doctor of legal sciences and professor at the University of Nouakchott Al Aasriya, has said Morocco is “an essential actor” in the stabilization of the Sahel.

The 14th episode of “Sahara Debate,” an online talk show that aims to shed light on the territorial dispute in southern Morocco, featured the Mauritanian expert on July 7. Faty researches security and stability in the Maghreb and the Sahel.

Faty stressed that the situation in the Sahel has deteriorated under the weight of these multi-dimensional, complex, and interdependent challenges over the past decade, describing the cyclical relationship between instability and poverty.

The Mauritanian researcher argued that neither security nor stability can exist in the Sahel without international, regional, and sub-regional coordination. The region also requires a coordinated and concrete strategy to ensure political stabilization and economic development throughout the Sahel.

Faty elevated Morocco as the first strategic and economic partner for Mauritania and said strong ties between the two countries are crucial in fostering stability and development along the Atlantic coast of the Maghreb and the Sahel.

Faty underscored the importance of Morocco’s leading regional and continental roles, highlighting the country’s efforts in the Sahel during the region’s current period of instability.

“Morocco has become an essential continental player,” he said. South-South cooperation drives the country’s approach towards Africa, “an approach that aims to consolidate peace, stability, and development in the continent.”

The security expert, therefore, believes it is only “natural” that countries in the Sahel region require coordination with Morocco to achieve peace, stability, and security.

To reinforce his position, Faty recalled that Morocco has made tangible contributions to the regional fight against violent extremism by training more than 1,463 Muslim preachers from the Sahel, West Africa, and Gabon at the Mohammed VI Institute for the Training of Imams, Morchidines and Morchidates. Morocco also shares with Sahel countries its counterterrorism experience, which has earned the praise of the US Department of State.

Through King Mohammed VI’s migration policy, he continued, Morocco has regularized more than 50,000 irregular migrants between 2014 and 2017, mostly from the Sahel and Sahara.

Western Sahara, “adjoining the gates of the Sahelo-Saharan region,” was another key point of the Mauritanian expert’s analysis of Morocco’s security efforts. He stated that Morocco’s experience in Western Sahara can help stabilize the Sahel.

“No shot has been fired since the entry into force of the cease-fire agreement in 1991, which makes the Moroccan Sahara region a haven of security and stability in the Sahelo-Saharan region, which is crisscrossed by transnational threats, terrorism, illicit flows of arms, illicit drug and human trafficking,” Faty underlined.

The expert’s recognition of Morocco’s role in the Sahel comes nearly one month after the Moroccan Minister of Foreign Affairs, Nasser Bourita, recounted King Mohammed VI’s vision for the development of the region during the first ministerial meeting of the International Coalition for the Sahel on June 12.

“The Moroccan approach is based on a vision outlined by his Majesty King Mohammed VI, from the very beginning of his reign. Human above all, it is revolved around an inseparable triptych: Security, human development, and training,” explained Bourita.

In addition to sharing expertise in intelligence and counterterrorism, Bourita reiterated that individual freedoms and opportunities are the heart of Morocco’s efforts in the Sahel.

Precariousness, unemployment, and lack of education comprise a “breeding ground for terrorism” he said, adding that “creating wealth means impoverishing terrorism and depriving it of its most compelling arguments.”

“It is by making this choice, the choice of investing in socio-economic and human development, that Morocco sees a lasting solution to terrorism.”