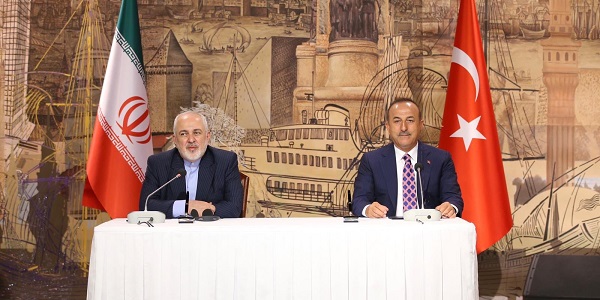 05/07/2020 – Iran and Turkey are increasingly coordinating policies across the Middle East as they work together on several issues. Their relationship has grown as both oppose the US role in Syria, and they have other common interests, such as trade to get around US sanctions and to fight Kurdish dissident groups. In general, this is a partly cynical policy of trade-offs, but there is also unity in their support for Hamas and also their antipathy toward Israel, which may bring Tehran and Ankara increasingly close on issues across the Middle East, from Yemen to Syria.

Iranian Foreign Minister Mohammad Javad Zarif went to Turkey on June 15, one of the most high-level meetings he has had during the COVID-19 pandemic. His agenda was clear: he wants Turkey to aid with sanctions relief and an arms embargo. To increase trade, Iran will aid Turkey on several files. That included Iran voicing support for Turkey’s role in Libya. Turkey has recruited Syrian rebels to fight in Libya so Ankara can secure energy drilling rights off the coast. Turkey has sent drones and arms to Libya to support the government in Tripoli against the opposition.

Egypt, supported by Saudi Arabia and other countries, has threatened to intervene to balance Turkey’s role. France and Turkey have clashed over Libya as well.

Turkey and Iran have also coordinated to strike at Kurdish militant and rebel groups, with Turkey launching operations Claw Eagle and Claw Tiger in northern Iraq on June 17. In coordination with Iran, the operations aim to increase Turkey’s bases in northern Iraq’s Kurdish region and to try to cut off the Kurdistan Workers Party from Iran’s border. The Arab League, Iraq and other countries have opposed the invasion of northern Iraq by Turkey and Iran.

Iran has begun to target what it calls “terrorists” on the Iran-Iraq border where Kurdish communities are located. The Islamic Revolutionary Guard Corps, which the US views as a terrorist group, is now coordinating with Turkey, according to reports, and Iran’s Tasnim News says that the IRGC is preparing to fight “terrorist” threats from the “Iraqi Kurdistan region.”

The IRGC has sought to coordinate policy with Turkey in the past. In 2014, a secret meeting in Turkey between the IRGC and the Muslim Brotherhood, sought to coordinate activity against Egypt and Saudi Arabia. The ruling party in Turkey is rooted in the Muslim Brotherhood. Unsurprisingly, Egypt and the Gulf states, except Qatar, have voiced concern about Turkey and Iran’s role in Iraq. Egypt strongly condemned on June 19 the Iranian-Turkish assault on Iraq.

The Iranian-Turkish coordination in northern Iraq and Libya may now be aimed at Israel. Turkey’s religious affairs ministry has been telling Palestinians that it will mobilize the “Islamic ummah” to defend Jerusalem from annexation. Iran’s regime has also vowed to make standing with Palestinians a “priority of the ummah,” or Islamic community. Iran’s supreme leader called for “armed resistance” on May 21. Top Iran judge and cleric Ebrahim Raisi has made Jerusalem and the Palestinians a priority.

Evidence for Turkey and Iran’s coordination include Turkey’s opposition to the US airstrike that killed IRGC head Qasem Soleimani, and Turkey’s attempt to oppose US sanctions on Iran, recently reiterated in mid-June. Close coordination with Qatar, which is an ally of Turkey and which has close ties to Iran, is also part of the puzzle.

The region has been replete with rumors about Turkey having a role in Yemen, a far-fetched idea but one that might see Ankara pay lip service to Iran’s role supporting the Houthi rebels fighting Saudi Arabia. Turkey and Iran may be coordinating in sub-Saharan Africa as well, where Iran has increasingly sought to support proxy groups and where Turkey is investing more in military outreach.

Close work with Hamas is also part of the Turkey-Iran relationship. Turkey has long hosted and supported Hamas, as has Iran. Hamas leader Ismail Haniyeh often holds court in Turkish-backed Qatar, meeting officials from Russia and elsewhere. The other Hamas leader, Khaled Meshaal, also is in Qatar for meetings. In December last year, Haniyeh visited Turkey and met Turkey’s president. Haniyeh was also in Iran for the Soleimani funeral in January.

While Hamas appears sidelined today in Palestinian politics, isolated in Gaza, it has more recent clout in the last six months, with its high level meetings with Ankara, Tehran and Moscow, as well as Doha. This could help foster the Iran-Turkey alliance that includes coordinating military activities in Iraq and Iran’s support for Turkey’s military adventure in Libya. It is also linked to Iran wanting the end to an arms embargo and Iran’s outreach to Russia.

Like most things in the region, however, nothing is perfect. While Russia has hosted Iran and Turkey for the Astana and Sochi talks on Syria’s conflict, there are sometimes differences between them. They all share opposition to the US role in Syria. But they are not on the same page in Libya, here Russia has backed the opposition. Ostensibly, Turkey and Russia are also on different sides in Syria, but Turkey is buying Russia’s S-400 air defense system and Turkey and Russia do joint patrols in Syria.

When Turkey invaded northern Syria and ordered the Trump administration to withdraw from Syria, it was Russia that brokered a deal with Turkey. While the US has sought to support Turkey’s role in Idlib and also in Libya, under the theory that Turkey is contesting Syria and Libya with Russia, the US has found usually that Ankara prefers to work with Russia and divide these areas.

The US says it wants to make Syria a quagmire for Russia and encourage the Syrian regime to change its policies using sanctions. Iran backs the Syrian regime. Turkey thus plays a dual role in Syria, but can find commonalities with Iran elsewhere. This is because Turkey and Iran share hostility to Israel and share hostility to Saudi Arabia, they both like Qatar and Hamas, and they both want a reduced US role in the region. Turkey wants to defeat the Kurdistan Workers Party (PKK) and Iran has agreed that in exchange for pressure on Kurdish dissidents in Iran and coordination with Turkey in Iraq, Tehran would get support on sanctions.

Jerusalem may be the next pressure point as annexation looms, and Turkey and Iran need another issue to galvanize popular support at home and in the region.