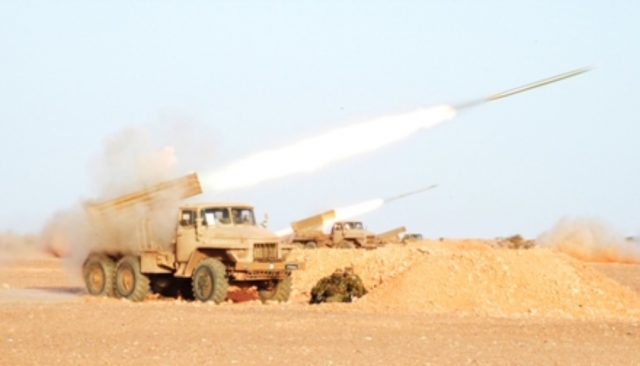 09/05/2020 – The chief of the Algerian armed forces, General Said Chengriha, attended a military exercise of his army near the Moroccan border. The timing and location of the exercise, as well as the use of live ammunition, raise many questions about the motives behind Chengriha’s visit.

The military exercise took place south of Tindouf, the Algerian town hosting  the separatist Polisario Front’s leadership, on May 5.

Parts of the footage taken by drones show how close the Algerian armed forces were to the Moroccan Western Sahara sand wall. The wall serves as a border between Morocco and Algeria in the Tindouf province.

Following the exercise, titled “loyalty to the oath,” Chengriha emphasized “the vital importance of this military region,” the Algerian press agency reported.

The choice of the Moroccan-Algerian border as a location to flex military muscles leaves several questions unanswered, especially as the exercise came only one day after the Moroccan diplomacy condemned Algerian-fueled separatism in the region.

The exercise further highlights Algeria’s controversial priorities during the COVID-19 crisis. As denounced by Morocco’s Minister of Foreign Affairs Nasser Bourita, Algeria is spending resources on separatism and acts of regional destabilization rather than the surging COVID-19 pandemic.

As of May 9, Algeria has recorded 488 coronavirus-related deaths, the second-highest death toll in Africa. The North African country also has a 9.09% fatality rate, one of the highest on the continent, exceeding both the African fatality rate of 3.65% and the global rate of 6.86%.

Bourita made the statement on Algeria’s position regarding the Western Sahara issue during the Online Summit of the Non-Aligned Movement on May 4.

“This country, instead of using its resources to improve the precarious situations of its population in the context of the COVID-19 pandemic, diverts them to fuel regional destabilization,” the Moroccan minister said in front of diplomats from 120 developing countries.

Bourita’s remarks followed Algerian President Abdelmadjid Tebboune’s reaffirmation of his country’s support for the separatist Polisario Front during a televised interview on May 2.

During the interview, Tebboune said Algeria is a “free country” and will continue “to defend causes, like the Palestinian cause and the Western Sahara conflict.”

The statement came to justify Tebboune’s refusal to accept international loans while his country is facing both an economic crisis, due to the fall in oil prices, and the COVID-19 pandemic.

“I personally think that the absence of international debt is a strengthening mechanism amid the COVID-19 crisis,” he argued.

Algeria provides both arms and funding to the Polisario Front, SADR’s military branch, and gives them entire control of Tindouf.

The Polisario Front claims to defend the rights of the Western Sahara population. However, the COVID-19 pandemic led the front’s leaders to show their true colors and revealed that their agendas are different from what they claim.

In early April, Sahara News reported that the Polisario Front leadership abandoned the Tindouf camps out of fear of the pandemic, leaving their Sahrawi residents to fend for themselves.

While the Polisario leadership self-isolate in their state-provided homes, Sahrawi residents of the camps are living in dire conditions without basic sanitation, healthcare, or security, said the news outlet.

Sahrawi residents of the camps have little to no access to disinfectants and no access to respirators and high-level medical equipment needed to treat serious cases of the coronavirus, lawyer and human rights activist Youssef Gharib, who maintains direct contact with camp residents, revealed.

Without intervention from the international community, the population of the Tindouf camps will face a humanitarian disaster, Gharib warned.