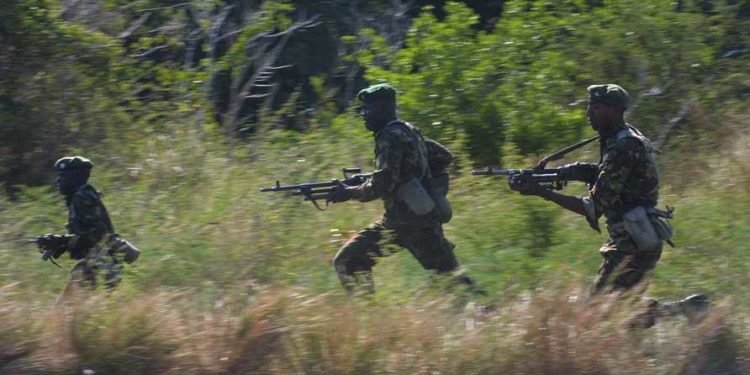 05/01/2020 – Al-Shabaab said in a statement that an “elite group of soldiers” dubbed the Martyrdom Brigade launched a raid on the base in Manda Bay in Lamu Kenya, some 500 kilometres from Nairobi and close to the Somali border.

The Islamist group described the base as “one of the many launch pads for the American crusade against Islam in the region.”

The U.S. has launched multiple airstrikes targeting al-Shabaab in Somalia.

U.S. forces at the Manda Bay base provide training and counter-terrorism support to allies in the region, according to US Africa Command.

Al-Shabaab also released several photographs that the militants claimed were evidence of the Manda Bay operation.

In one grainy image, an al-Shabaab fighter waves the group’s black and white flag as a small plane and other unidentified equipment burn in the background.

Kenya Defence Forces (KDF) spokesman Lieutenant Colonel Paul Njuguna told dpa that the militants had only breached the Manda airstrip but not the Camp Simba military base.

In a tweet, the KDF said: “This morning at around 5:30 am an attempt was made to breach security at Manda Air Strip.

“The attempted breach was successfully repulsed.”

The civilian airstrip also acts as the entrance to the base. After a brief closure, it was reopened, according to a statement from the Kenya Civil Aviation Authority.

“Four terrorists bodies have so far been found. The airstrip is safe,” the tweet continued.

No U.S. or Kenyan fatalities have been reported.

The Kenyan defence force tweeted that smoke seen in footage from the scene is from an affected fuel tank.

“Arising from the unsuccessful breach, a fire broke out affecting some of the fuel tanks located at the airstrip.

The fire has been put under control and standard security procedures are now ongoing,” the Kenyan defence force said further.

In a statement, the AU.S.frica command said al-Shabaab was “exaggerating the security situation on the ground.”

Instead, U.S. officials described the security situation as “fluid,” saying that the attack had damaged infrastructure and equipment.

“Al-Shabaab resorts to lies, coercion, and the exertion of force to bolster their reputation to create false headlines,” said Major General William Gayler, the director of operations for the U.S. Africa Command.

“It is important to counter al-Shabaab where they stand to prevent the spread of this cancer.”

The U.S. has supported Somali forces and African Union soldiers in the fight against al-Shabaab, which is affiliated with the international al-Qaeda terrorist network.