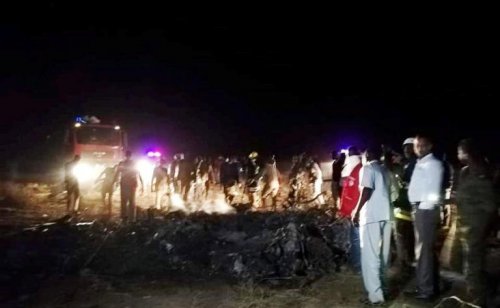 03/01/2020 – 18 people were killed, including military personnel, judges and four children, after the crash of a military cargo plane, in El-Geneina airport.The Antonov-12 cargo plane crashed minutes after taking off from the capital of West Darfur State, on Thursday evening, according to the Sudanese army spokesman Amer Mohamed al-Hassan.

The plane « crashed 5 minutes after taking off, resulting in the death of its 7-member crew, » four officers and three other ranks, « in addition to three judges and eight civilians, including four children, » said al-Hassan

The Russian four-engine plane crashed while it was heading back to Khartoum after transporting humanitarian assistance for the victims of the tribal clashes that erupted in El-Geneina on 29 December.

The Sudanese military spokesman gave no reason for the incident but said the crash will be investigated.

Sudanese Minister of Justice, Nasr al-Din Abdel Bari had to fly on the plane which crashed in El-Geneina but he missed the fight due to the ongoing investigations into the clashes.

Prime Minister Abdallah Hamdok is still in El Geneiena as he continues to meet tribal leaders after the bloody tribal clashes.