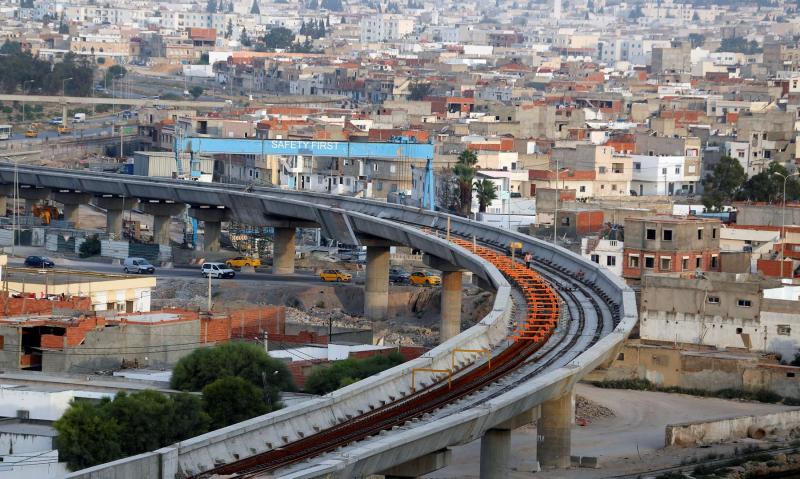 2018/19/02 – The Arab Maghreb Union (AMU) has received a grant from the African Development Bank to modernise an integrated regional railway network between Morocco, Algeria and Tunisia, a step analysts said was crucial to strengthening ties in North Africa.“The idea of a railway linking Tunisia, Algeria and Morocco is very old,” said Yacine Bendjaballah, CEO of the National Company for Rail Transport. “Transport officials from the AMU have discussed it many times when they’ve met.”

The plan involves the modernisation and expansion of 2,350km of rail lines between Morocco, Algeria and Tunisia by 2060. There is to be a meeting of regional railway officials in March in Tunis to discuss steps to further the project.

The AMU includes Algeria, Morocco, Libya, Mauritania and Tunisia, but only Tunisia, Algeria and Morocco have national railway networks, developed a century ago during French colonial rule. Trains shipped materials, such as phosphates and iron-ore, to coastal hubs in the three African countries.

The railway modernisation plan will cost about $4 billion over 40 years.

The AMU’s feasibility assessment of the project showed a potential train transport of 6,738 passengers and 8,388 tonnes of goods per day on its Tunis-Algiers section.

The study showed that by the time the project matures in 2060, more than 36,000 passengers would travel in trains every day between Morocco and Algeria and more than 22,000 tonnes of merchandise would be transported.

In its initial stages the project would see to the upgrade of 350km of railway linking the Fez, Morocco, to Akid Abbes, Algeria. It also covers the modernisation and expansion of a 260km line from Annaba, Algeria, to Tunis, via the Tunisian city of Jendouba.

The question of whether the project will materialise hinges on if the AMU, which has been stalled for years due to regional divisions, will come to an agreement. The AMU has been unable to deliver on many promises, such as closer security cooperation, diplomatic rapprochement and free trade for a region of approximately 100 million people.

It has been largely inactive due to political tensions between members and a lack of political will, complicating efforts to integrate the region that experts say would be a boon for the economy.

The World Bank said integrating the economies of Algeria, Morocco and Tunisia would have helped grow their economies 34%, 27% and 24%, respectively, from 2005-15. The bank estimated that the lack of economic integration cost the region 2% annually in growth.

“Today more than ever, we must focus on the Maghreb integration and its links with the Euro-Mediterranean area,” said Tunisian expert Kamel Ben Amor, a researcher specialising in rail links in the Maghreb.

“Besides giving answers to economic and trade issues, this movement of integration helps sustain peace and security in the region and helps the continuity of its common human values.”

“The authorities in three countries are increasingly aware of the advantages of railway transport and they’ve been giving it more attention since the early 1990s,” Ben Amor said.

Moroccan university teacher Driss Lagrini, who heads a civic Association for the Maghreb Action, said the AMU has failed to enact “bold initiatives” to achieve the crucial objective of better integrating the region.

“The region faces domestic challenges like achieving stronger growth and external challenges like terrorism, illegal migration and cooperation with the European Union, making Maghreb integration a necessity,” he said.