2018/11/10 – A series of shake-ups has upended the leadership of Algeria’s powerful security apparatus, with personnel reshuffles affecting the upper echelons of the country’s military, police and security forces. The extent of and motives behind the ousters, unprecedented during the 19-year administration of President Abdel Aziz Bouteflika, remain unclear, but their nature and timing give some indications of the intent behind them. Algeria’s inner political workings remain opaque, making it difficult to know what exactly is unfolding in Algiers. But some of the details associated with the spate of military reorganizations point to a mutual effort by the army and the presidency to retain control.

The leadership changes began in earnest in June, when Abdelghani Hamel, the head of the Algerian national police force, was fired after a joint military and police operation resulted in the seizure of a massive shipment of illicit drugs off the Algerian coast. The bust led to speculation in the Algerian media that corrupt police were involved in drug smuggling. Since then over a dozen more powerful security or military officials have been removed from their positions, with the moves being justified as part of broader anti-corruption efforts. In August, four of Algeria’s six regional military commanders were let go, along with five of the six regional commanders of the gendarmerie. In September, several more officials from the gendarmerie and the army were removed from their posts and referred to military courts for investigation into charges of financial corruption. As of now, only three of the estimated one to two dozen top generals from the pre-Bouteflika era remain in the army, including its chief of staff, Lt. Gen. Ahmed Gaid Salah, the man publicly responsible for instigating the personnel changes.

The « state and the military and the party » (specifically Bouteflika’s Algerian National Liberation Front party) represent the three points of the traditional power-sharing triangle in Algeria. Even more than in nearby Egypt, where the military holds influence over the economy and the government, Algeria’s military underpins all of the state’s functions. Because the Algerian People’s National Army succeeded the revolutionary armed forces that won Algeria’s bloody fight for independence from France, Algerians hold it in heroic esteem. Furthering the army’s image as Algeria’s chief protector was its victory over extremist militants in the country’s civil war in the 1990s. Compulsory military service for all males has reinforced the armed forces’ popularity in Algeria, where military service is a critical signifier of patriotism, providing a shared cultural experience among all families, rich and poor. (The compulsory nature of the service attracts less controversy in Algeria than it might elsewhere because its private sector remains relatively anemic, at least when compared with the country’s massive public sector bureaucracy.)

But the military elite who guide the country sit far above the army’s rank and file, and perceptions of their lofty status generates dissatisfaction among the public. By design, much of the military’s influence in politics comes mostly from behind the scenes, in part out of a sense of self-preservation. Algerians in general don’t take lightly the concept that an invisible power directs the country’s affairs. In a wry Algerian joke concerning the country’s flag, it is said that the green stands for Islam, red for the blood of the martyrs (of both the war of independence and the 1990s civil war), and white is for the blank canvas of history, wiped clean by the military’s self-serving revisions.

The military, however, has long tried to cultivate an image as a neutral arbiter of Algeria’s political scene, in addition to that of the country’s ultimate protector. This is possible in Algeria, where the large military has no real checks over its domestic power. In fact, it occupies a comfortable position away from partisan politics and commands respect and fear from the civil government. A recent comment by the leader of Algeria’s main Islamist party — the Movement of Society for Peace — inviting Gaid Salah to resolve some of the country’s current political disarray, prompted pushback from opposition groups and the military alike. In denying the request, Gaid Salah reasserted the army’s independence as well as its power. The army « knows its limits and its constitutional missions, » he said. « Therefore, it can never get involved in the entanglements of parties and politicians. » The remarks reflect the reality that while the Algerian army leadership has no intention of relinquishing its deep-rooted power, it does not want to make itself a visible target of partisan politics.

One likely rationale for the recent reshuffles is that Bouteflika’s inner circle has instituted a purge to ensure the utmost loyalty from the army before 2019 presidential elections. Bouteflika, 81, has decided to stand for election for an unprecedented fifth term, a decision that generated mixed feelings within Algeria’s political sphere about whether it would be good or bad for the country. Most institutionalized political parties have indicated tacit support for his fifth term, while some nascent opposition groups — like Mouwatana — have raised Algeria’s economic woes as a reason for embracing new leadership.

This idea does not rule out the possibility that Bouteflika’s inner circle is concerned about the chances of a military coup against the aging leader. Supporting this idea is the fact that some of Gaid Salah’s closest allies within the armed forces have reportedly been ousted, suggesting that Gaid Salah is acting at least in part on Bouteflika’s orders, and that the civil government is exercising what power it has over the army. After all, the government’s recent implementation of a law that prevents retired soldiers from engaging in public affairs followed not long after a military official criticized the idea of Bouteflika running for a fifth term. This suggests that the civil government does have some degree of control over the army, at least when the army is threatening its power.

To maintain its power relative to the military, the civil government has long worked to placate the army and keep the military elite happy. This includes allowing the army to exercise relative control over patronage networks that give its officers first dibs on land and businesses in the private sector. Given the Algerian military’s considerable political influence, it is little surprise that it has benefited greatly from significant arms purchases and is relatively well equipped. Arguably, Algeria ranks second only to Egypt as the best-equipped force on the African continent and has in recent years bought considerable amounts of advanced weaponry from Russia and Europe. There is likely some element of politics behind Algerian arms purchases, especially given the civilian government’s incentive to placate its generals with new equipment. 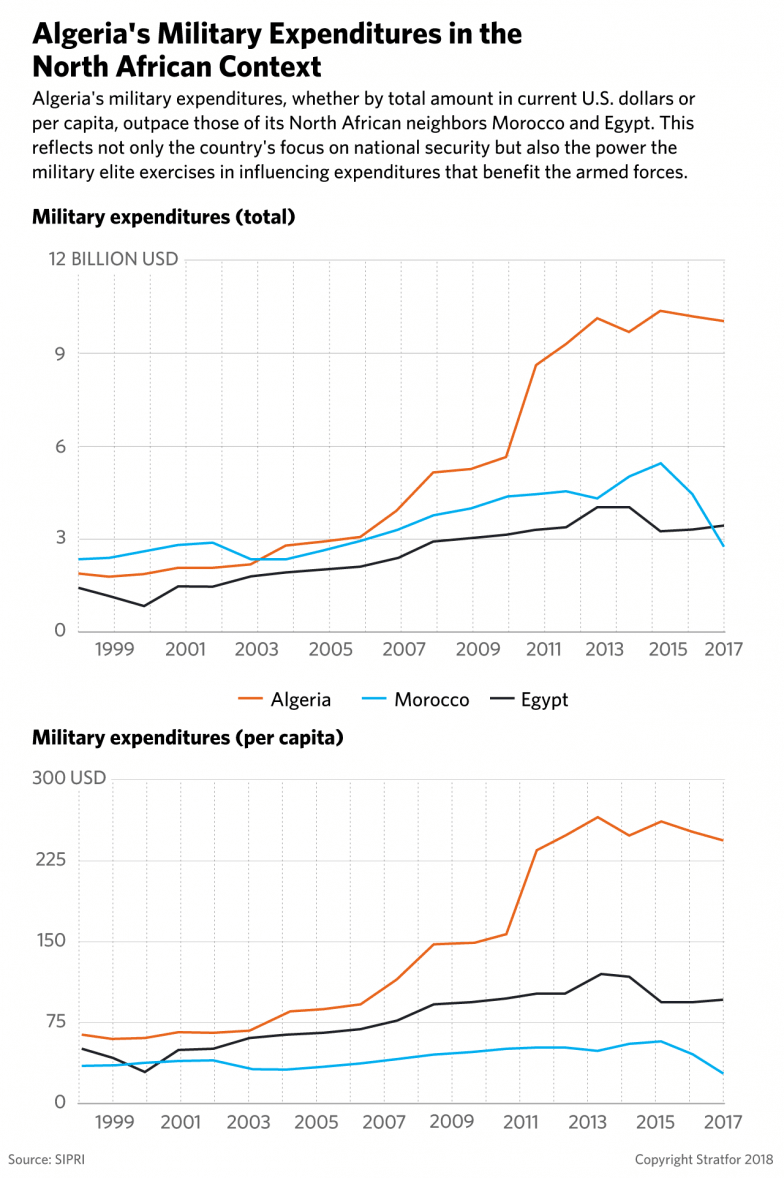 There is, of course, a clear national security motivation for its arms purchases. Algeria’s generous appetite for arms seems to contradict its reticence to project power much beyond its own borders (a reluctance enshrined in constitutional limits on military deployments) or to cooperate with foreign-led counterterrorism initiatives. Nevertheless, Algeria does feel the need to maintain its military advantage over neighbor and geopolitical rival Morocco, with which it has clashed on numerous occasions. In addition, its long and bloody war of independence instilled concern within the Algerian military over outside intervention in its affairs, and it views strength as a powerful deterrent to foreign meddling.

Beyond the coup theory, it is possible that Gaid Salah himself is reordering the military leadership in preparation for exerting more power independent of Bouteflika, especially as the president, who is beset by health problems, grows sicker and weaker. The army chief could be removing some of the more ambitious generals who have challenged him personally, or who are aligned with Said Bouteflika, the president’s younger brother, who occupies a key behind-the-scenes role in his brother’s administration.

Other speculation holds that Gaid Salah has instituted the purge to get rid of those remaining in the power structure with connections to Gen. Mohamed Mediene, the powerful former head of military intelligence known as Toufik, whom President Bouteflika removed in 2015. Those moves would require coordination between Bouteflika’s clan and Gaid Salah. The fact that Gaid Salah has retained his position at the helm of the armed forces while conducting the reshuffles suggests that he indeed has Bouteflika’s support. That Gaid Salah has maintained his power in the years since Toufik’s removal suggests that he balances well between Bouteflika’s clan and his own, but he still might be anxious about his future relationship with the presidency after the current ailing president passes, potentially shaking up the balance of power.

A Distraction From a Weak Economy?

Another key driver behind the recent reshuffles may be coordination between the military and the presidency to ensure their mutual survival beyond 2019’s elections, a prospect that Algeria’s weak economy threatens. The Algerian government’s often erratic plans for economic reform — including a campaign to print more money — have been soundly criticized by some opposition parties.

The public as well has shown signs of dissatisfaction. On top of its complaints about economic deterioration, the public’s grievances about the corruption pervading Algerian society have grown louder in its news media. One of the key charges leveled against members of military leadership has been their use of their positions to enrich themselves through money laundering and other illicit activity. Between the firings that followed the June drug bust and the September dismissals that led to financial investigations of the officers involved, it is plausible that the government, with the army’s assent, is cleaning house. At the same time, both the civil government and armed forces may be trying to assuage growing dissatisfaction over Algeria’s economic performance by demonstrating action.