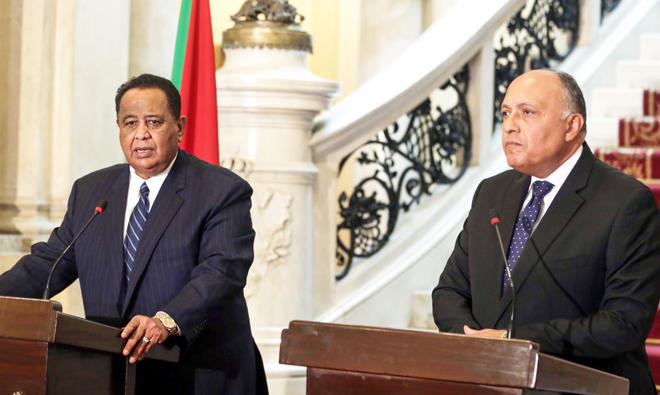 2018/02/08- Sudan on Thursday denied any military cooperation with Turkey over a controversial port after a meeting with Egypt to ease months of diplomatic tensions.
“There is no intention to establish a Turkish base, not in Suakin, nor any place in Sudan,” Sudanese Foreign Minister Ibrahim Al-Ghandour said in Cairo.
The meeting was called after the latest flare-up in decades of difficult relations, and as part of an agreement struck by Egyptian President Abdel Fattah El-Sisi and the Sudanese President Omar Al-Bashir at the African Union summit in Ethiopia last month.
On Jan. 4, Sudan recalled its ambassador to Cairo days after Egyptian media warned that Sudan was “playing with fire” by strengthening its ties with Qatar and Turkey.
Ankara signed a cooperation deal in December with Khartoum and agreed to carry out a series of reconstruction projects in Sudan worth $650 million.
These included rebuilding the port of Suakin on Sudan’s Red Sea coast. Turkey said this would increase tourism to Sudan and establish a transit point for pilgrims traveling to Makkah.
Egypt feared that Turkey planned to use Suakin as a military base to gain a foothold in the region.
At a press conference with his Egyptian counterpart on Thursday, Al-Ghandour stressed the area has 400 buildings and “it is a pure Sudanese property for Sudanese people only.”
“The Turkish president offered to renovate old houses and offered to be used as a tourist island for the common benefit between Sudan and Egypt,” he said.
During the meeting between the foreign ministers and heads of the intelligence services from the two countries, Egypt and Sudan agreed to stop their war of words, and strengthen relations.
Egyptian Foreign Ministry said the discussions were “very successful.”
Khartoum and Cairo have long disagreed over ideological and territorial issues, including the status of an 8,000 sq. mile piece of land known as the Hala’ib Triangle.
They also disagree over a multibillion-dollar dam Ethiopia is building on its share of the Nile. Sudan supports the project, but Egypt fears it will have a severe effect on water supplies downstream.
The statement said the countries would raise the level of bilateral cooperation to the highest level and set up a framework to open up coordination regarding the Ethiopian dam.
The two sides also agreed to improve cooperation in a number of areas including energy and infrastructure projects and communication between the foreign ministers.
Egyptian Foreign Minister Sameh Shukri said the two countries would raise security and political coordination to the highest level.
Al-Ghandour said the meeting was “a historic point in the relations between the two countries” and that the Sudanese ambassador to Cairo would return very soon.
He said relations between the two countries is a historical one of blood and brotherhood.

Source: ArabNewes/Image: AFP- Egyptian Foreign Minister Sameh Shoukry, right, gives a press conference with his Sudanese counterpart Ibrahim Al-Ghandour after their meeting together and with their respective intelligence chiefs at Tahrir Palace in the Egyptian capital Cairo on Thursday.