13/01/18- But, granted rare access to northern Niger’s gold fields, we saw how the vast majority of workers aren’t benefitting nearly as much as them.

Gold-mining sites in northern Niger tend to have an origin story, exaggerated with each retelling. In the case of Emzigar, located in the shadow of a mountain by the same name, it was an ethnic Tuareg nomad named Cherif who, as he tended to his camels and goats, found an interesting-looking rock.

Cherif thought it might be one of the stones that Tuareg artisans use to make jewellery. He brought it to a friend, who recognised it as gold. Cherif, legend has it, had stumbled upon 40 grams of what locals have come to call « a gift from God »,” valued on the local market at roughly $1,400 (£1,036), more than three times Niger’s per capita annual income.

Within days, hundreds of people had come to Emzigar. Within weeks, the previously uninhabited plot was a tent city of several thousand, replete with shops, restaurants and a private health clinic. Emzigar is only one – and by no means the largest – of hundreds of encampments that have proliferated throughout Niger’s mountainous, desert north.

Niger’s current gold rush began in 2014, when, according to another legend, an ethnic Toubou herder in the Djado plateau, near Niger’s northeast border with Libya, discovered a large stone the size of a date, or – depending on who you ask – an orange. The news spread throughout the region, and tens of thousands of men, young and old, descended on Djado, leaving behind livelihoods as farmers and herders which are increasingly tenuous due to climate change.

Closer to the Algerian border, a site known as Tchibarakaten also exploded, with businessmen installing infrastructure such as water towers, shops, restaurants, a field hospital and light fixtures to meet the demands of thousands of new arrivals. A new class of gold barons emerged, many of whom are familiar names associated with smuggling and narco-trafficking who enjoy close relationships with high-level government officials.

The Nigerien government closed the Djado gold fields in April of 2017, citing security concerns amid stories of armed Chadian and Sudanese groups active in the mining areas. The region’s governor, Sadou Soloké, says the government wants to re-open Djado to the public in an organised and regulated manner, but rumours abound that foreign companies are working to secure permits, which activists are already comparing to the deals that allowed French and Chinese companies to corner the uranium and oil markets in Niger.

With the closure of Djado, the gold rush expanded south to the base of the Aïr mountains. Shop owners and equipment vendors from as far as Sudan and Mauritania have come to these once secondary mining sites, while hundreds of people from Niger’s urban centres and towns in the south arrive daily, hoping to get rich quick.

Northern Niger, a place of rebellions and uprisings in recent decades, has long embraced a spirit of freedom from state control. The transport of licit and illicit goods – fuel, foodstuffs, weapons, people and drugs – through the desert and across borders is a way of life for entire communities. The recent gold rush only reinforced images of a lawless « Wild West ». Armed bandits intercept gold convoys, and the area is awash with weapons that have been circulating since stockpiles in Libya were looted during the chaos that followed Muammar Gaddafi’s demise.

The gold rush comes at a time of extreme uncertainty for a country trying to cope with the aftershocks of civil wars in neighbouring Mali and Libya, the Boko Haram insurgency in neighbouring Nigeria and a recent spate of attacks by jihadist groups in its own territory (including the attack on the 4th of October, 2017 in which four American soldiers were killed).

Northern Niger once boasted a thriving tourism economy, but when Western embassies deemed the area unsafe for their citizens in the late-2000s – in part due to a Tuareg-led rebellion in 2007 – the tourism sector collapsed. For a time, the local economy was kept afloat by jobs related to uranium mining, remittances from Nigeriens working in Libya, and later by the fledgling gold economy. 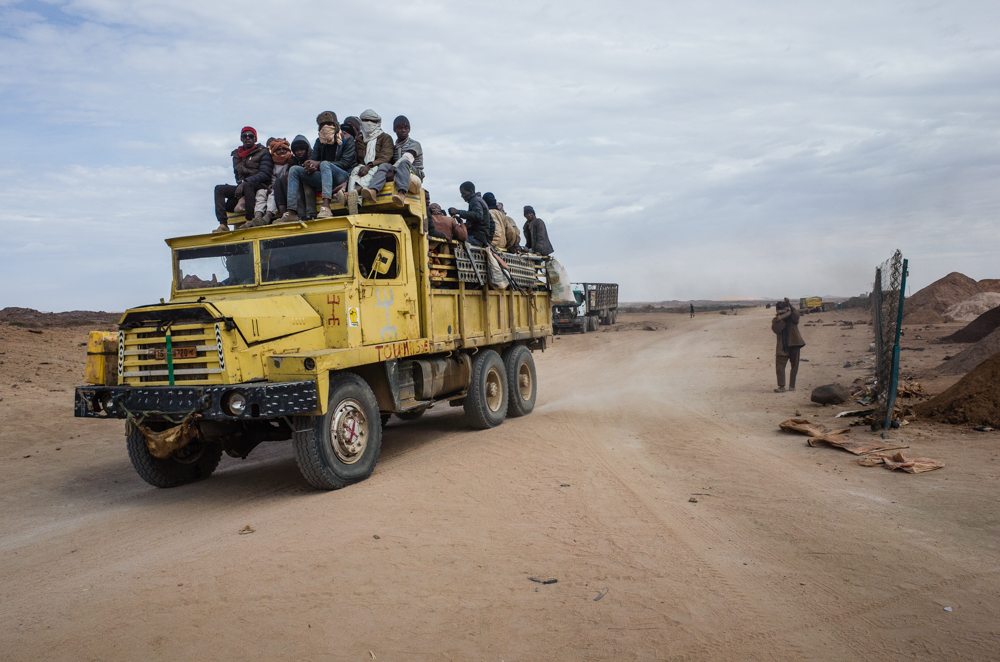 Photo: A truck full of prospective gold miners arrives in Tabelot, at the gates of Gidan Daka.

There was also a robust migrant smuggling industry, with Niger serving as the principal gateway for migrants and asylum seekers from West Africa travelling to Libya with aspirations of boarding boats to Europe. Local officials welcomed the economic boom driven by migrant smuggling, but amid pressure from the European Union to stem the flow of migrants passing through its territory, the Nigerien government cracked down on the industry in late 2015 and early 2016.

The move has proved massively unpopular among locals in the city of Agadez and other smuggling hubs, and although migrant smuggling continues, the Nigerien government estimates that more than 6,000 people working in the migrant smuggling industry have lost their livelihoods. The US is building a drone base on the outskirts of Agadez, adding a new layer of inquietude as locals fear that freedom of movement will be further restricted as they prepare for life with armed robots flying overhead.

Gold, locals hope, will be a lifeline amid economic collapse.

« Agadez is tourism and migration. Both have been cut off, so it is total misery, » says Mahamane Elhadj Souleymane, who represents over 90 tribes throughout the region as chief of the Kel Eweye Tuareg confederation. « Now, people go work themselves to death looking for gold. » 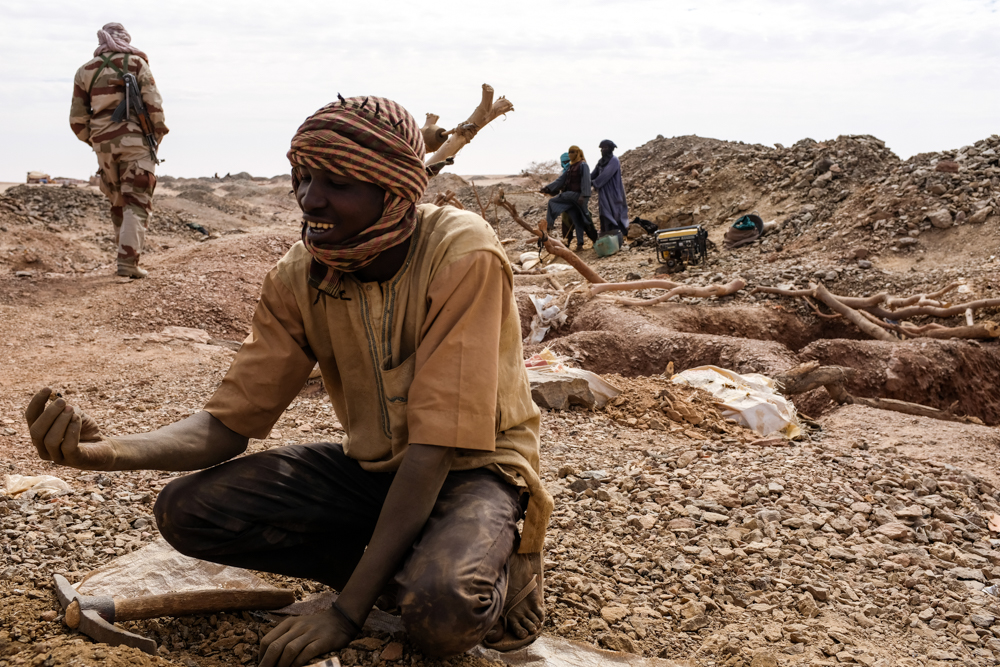 Photo: A gold miner in Emzigar smiles as he finds what might be a piece of earth containing several grams of gold.

The gold fields are in locations which Western embassies have designated as unsafe for their citizens to travel, and the Nigerien government often restricts the movement of « western » foreigners as a result. I’m able to access certain gold sites by embedding with Niger’s national guard, who periodically patrol the area to keep tabs on security.

The patrol begins with a visit to Emzigar and continues along the interior of the Aïr mountains, passing by new sites that are yet to be named and old ones that were picked clean and abandoned before they received a moniker. 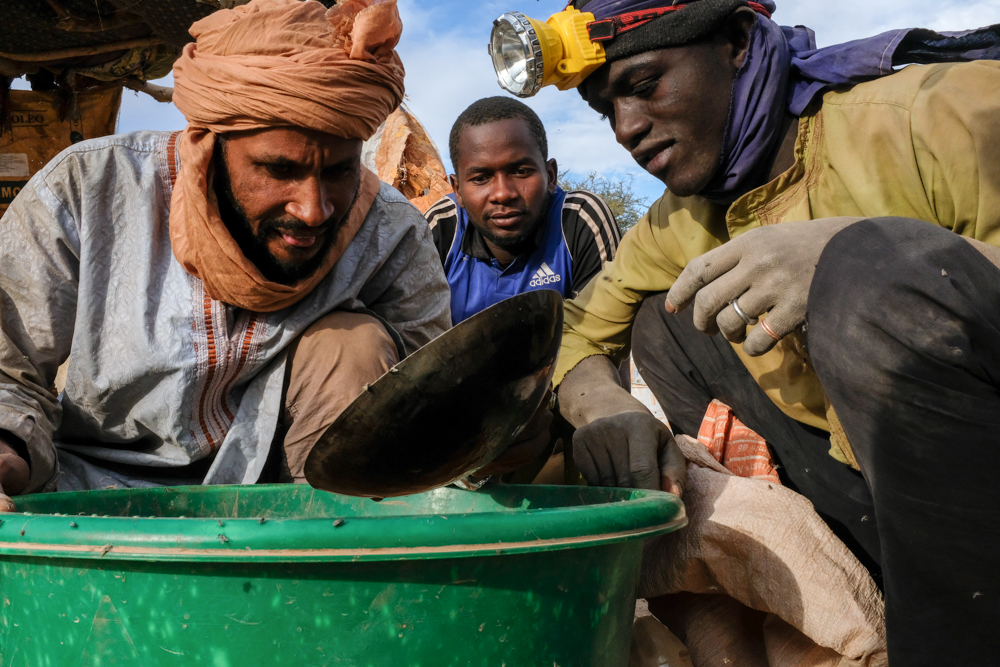 Photo: Issouf Djibril, left, peers into a pan that contains a mix of water, soil and mercury, to see if a prospective plot contains gold, in the tent city of Fasso.

In the encampment of Fasso, 28-year-old Issouf Djibril peers into a murky mix of water, earth and mercury. Djibril left his work as a gardener in southern Libya three years ago as soon as he heard about the gold rush outside his native city of Agadez. He has established himself as an expert in finding undiscovered plots. « I liked my work in Libya, but I like gold better, » he explains. « I make more and I’m closer to home. I made enough money to get married, so I am happy. »

The military patrol finishes in Tabelot, a once sleepy market town whose population has swelled from 4,000 in 2014 to 38,000 and counting. Merchants in Tabelot once served the needs of nomads, pastoralists and farming communities that live atop the Bagzane plateau which overlooks the city. Now, they cater almost exclusively to the artisanal mining economy, which has transformed the town into a hub of industry.

On the outskirts of Tabelot, an area known as « Gidan Daka » – which translates from Hausa, the region’s language of commerce, to « House of Grinders » – hosts 6,000 men and boys processing bags of earth for a few dollars a day. The work is gruelling, and it’s not clear that the payoff is worth it, but grinders like Ahmed Ibrahim say they have little choice. 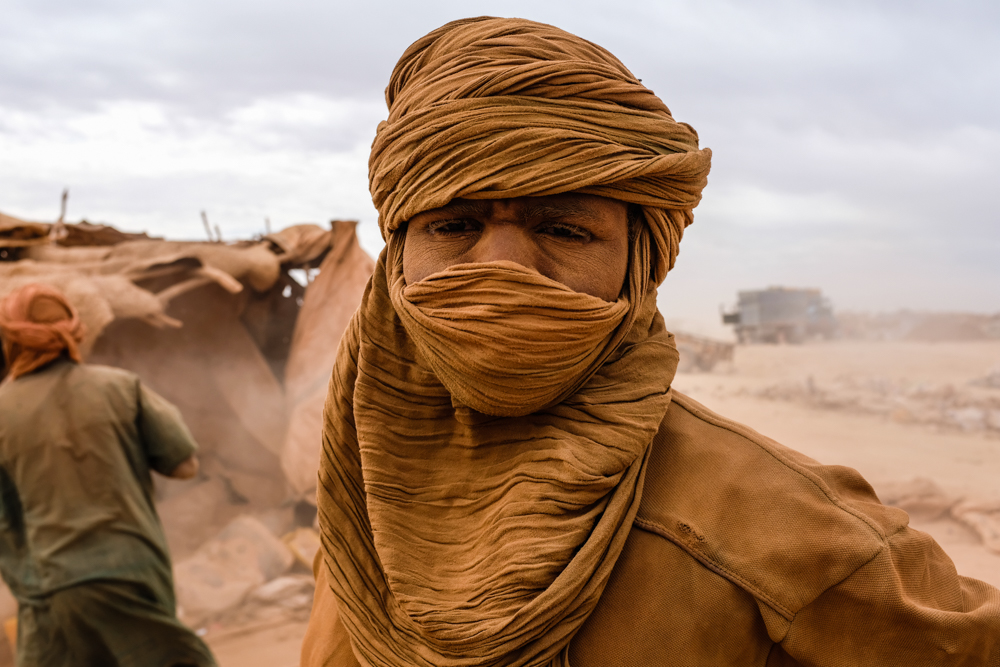 « There is no work in Maradi so I came here, » explains the 24-year-old father of two daughters aged two and four, who has been in Gidan Daka for one week. Ibrahim talks through a Turban caked in dust, and the incipient crows feet around his eyes are accentuated by dirt and sweat. « If I find money, I’ll send it back home, » he says.

While stories of people who have made a fortune in gold ricochet throughout the Aïr mountains, one has to squint to see anything resembling wealth and prosperity. Whatever process is taking place here may be feeding mouths, but it hardly looks like sustainable economic development.

Wealthy locals and foreigners with access to capital are moving in on the industry, which is already rendering people like Ibrahim obsolete. Just outside the walls of Gidan Daka, two hangars installed by Sudanese technicians – funded by Niger’s Arab business elite and investors from Sudan – loom over 40 gold processors powered by six massive generators. These factories process soil for 24 hours a day on an industrial scale, making grinders in Gidan Daka an afterthought. 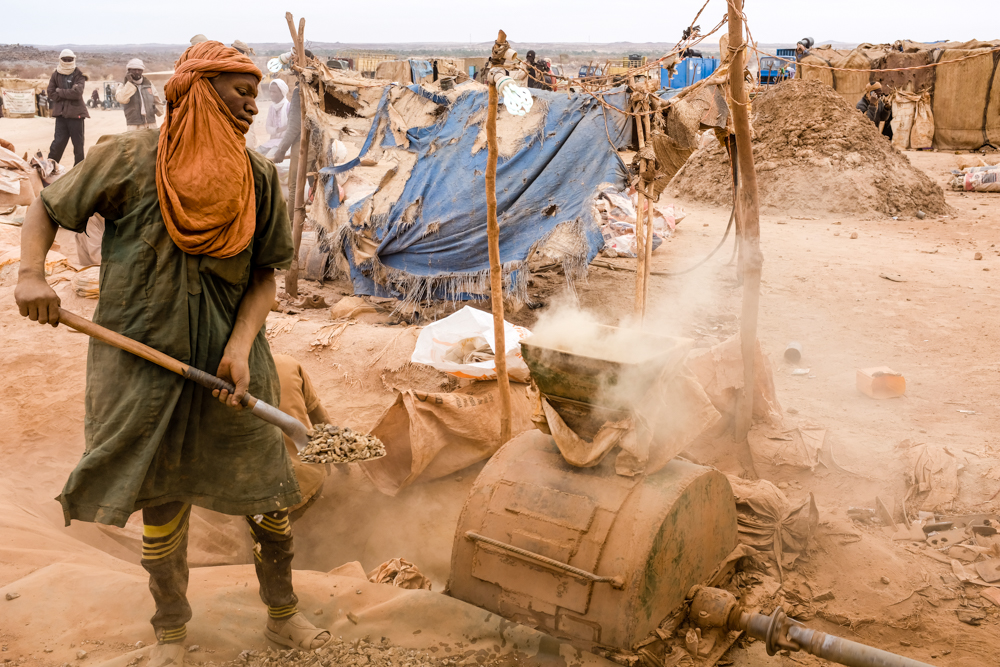 Photo: A « grinder » in Gidan Daka shovels earth into a machine that is normally used to grind millet.

Whether or not the « gift from God » will last, or benefit ordinary Nigeriens in any meaningful way, remains an open question. But at least for now, at this time of extreme anxiety, it is better than any alternative the local imagination can muster.

« I hope this continues forever, because it brings peace, » says Effad Alhouwas, an elder from a nearby town who functions as an unofficial mayor and mediator at Gidan Daka. « All of these people do not have work, » he continues, putting together his hands and then dropping them down as if opening a book. « They can’t make money any other way. »