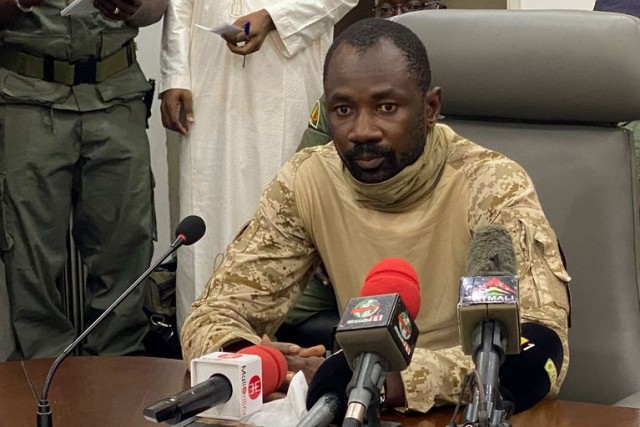 A coup unfolded in Mali on August 18, forcing President Ibrahim Boubacar Keita to resign. After the president stepped down, the military personnel who staged the coup announced the establishment of the National Committee for the Salvation of the People (CNSP) as the entity in charge of leading Mali.

In a televised statement, CNSP said they had assumed responsibility for the people of Mali and will “ensure the continuity of the state and public services.”

The Malian army also emphasized that it is not interested in retaining power. Rather, CNSP seeks a “civil political transition” and credible general elections to exercise democracy “through a roadmap that will lay the foundations for a new Mali.”

Elections were a topic of discussion during a meeting on Tuesday between CNSP’s President, Colonel Assimi Goita, and the Ambassador of Morocco in Mali, Hassan Naciri.

Mali’s new leader received the representative of Morocco at the military base of Kati near the Malian capital, Bamako. The Kati military base was the site of a military mutiny that directly preceded the coup and now appears to host the country’s new leadership.

During the meeting, Goita expressed his “deep gratitude” for King Mohammed VI and Morocco’s crisis resolution efforts, according to Morocco’s state media.

Goita said the Moroccan ambassador was the first diplomat to make contact with Mali’s new leaders on August 20, “welcoming the centuries-old relations and the fruitful partnership that bind the two brotherly countries,” the source continued.

The CNSP president and the Moroccan ambassador also took the opportunity to review the evolution of the situation in Mali following the coup. Goita relayed to Naciri his confidence in the measures taken to calm the political storm, adding that “the political transition will be discussed between the different components of the Malian society.”

A history of productive Morocco-Mali ties

The new leader’s appreciation for Morocco’s efforts in Mali comes after Morocco’s Ministry of Foreign Affairs called for a “peaceful civil transition, allowing a rapid and supervised return to constitutional order.”

The August 19 statement added that Morocco has full confidence its “Malian brothers” will “draw on the values of peace and national harmony rooted in them” in the aftermath of the coup.

Morocco remains fully committed to the “serenity and stability of Mali,” the statement concluded.

Prior to the coup, Morocco and Mali maintained a close partnership, particularly on issues of regional security and migration.

The day before the coup, Mali’s Minister of Foreign Affairs and International Cooperation, Tiebile Drame, met with his Moroccan counterpart, Nasser Bourita, in Rabat.

Drame expressed Mali’s appreciation for Morocco’s active support for peace initiatives and efforts in resolving socio-political issues in the Sahel. Bourita, on several occasions, has stressed the importance of maintaining a watchful eye on security in the region.

Morocco’s quick extension of the olive branch to Mali’s new leader further illustrates the country’s focus on stability in the Sahel as a top priority.

Sahel-Elite (Bamako-Mali) | Photo: President of the National Committee for the Salvation of the People, Colonel Assimi Goita. Photo: Wikimedia Commons