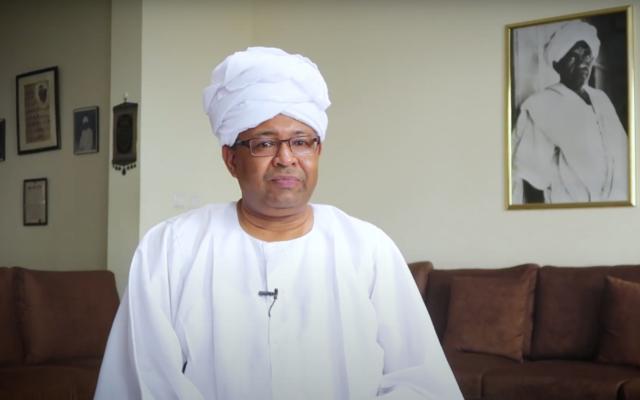 Khartoum Foreign Ministry earlier denied knowledge of talks after Haidar Badawi Sadiq opened up about secret negotiations for normalization
By TOI Staff
19/08/2020 – Sudan’s Foreign Ministry spokesman was fired on Wednesday, a day after he sparked a diplomatic flurry by publicly disclosing normalization talks with Israel, apparently without authorization.

Haidar Badawi Sadiq told Sky News Arabia on Tuesday that Sudan was interested in establishing ties with Israel and predicted that a treaty between Jerusalem and Khartoum could be signed by the end of the year or in early 2021. The comments came hours after he posted a public blog in which he urged the country’s military-civilian leadership to speak openly about ongoing talks.
His comments, which came amid feverish speculation that other countries may soon join the United Arab Emirates in agreeing to ties with Israel, were swiftly walked back by the country’s acting foreign minister Omar Qamar al-Din Ismail, who said he was “surprised” by the announcement.“The matter of relations with Israel has not been discussed in the Foreign Ministry at all. No one tasked Haidar Badawi Sadiq with making statements on this matter,” Ismail said.

Sadiq later said that he had confirmed talks with Israel because no senior government officials had bothered to deny a prediction by Israeli Intelligence Minister Eli Cohen that ties with Sudan may be agreed to in the coming months.

Cohen insisted on Wednesday that peace talks between Jerusalem and Khartoum were ongoing. He claimed that they included a provision for the return of Sudanese asylum seekers currently in the country.

This is not the first time Sudanese contacts with Israel have become mired in controversy, highlighting divisions between Khartoum’s military and civilian leaders. In February, Sudanese transitional leader Lt. Gen. Abdel Fattah al-Burhan met with Prime Minister Benjamin Netanyahu in Uganda, a meeting quickly disavowed by the country’s prime minister Abdalla Hamdok. At the time, a senior Israeli official told The Times of Israel that the two had agreed to gradually normalize relations between the two nations, which remain technically at war.

Israel officials have long expressed a wish for improved ties with Khartoum, citing its importance in the region as well as its geographic location.

A Sudanese government official told The Associated Press Tuesday that deliberations between Sudanese and Israeli officials have been going on for months, with help from Egypt, the UAE and the US.

“It’s a matter of time. We are finalizing everything. The Emirati move encouraged us and helped calm some voices within the government who were afraid of backlash from the Sudanese public,” he said, speaking on condition of anonymity because he was not authorized to brief the media.

The US announced on Thursday that Israel and the UAE had agreed to normalize ties, solidifying a long-secret relationship, and officials have predicted that ties with Bahrain, Oman, Sudan and other countries may follow.
The Times Of Israel
Sahel-Elite (Bamako-Mali) | Photo: Sudanese Foreign Ministry spokesman Haidar Badawi Sadiq was fired on August 19, 2020, a day after expressing support for peace with Israel. (YouTube screenshot)