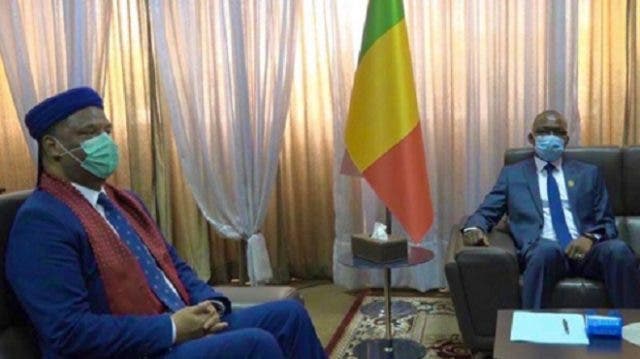 13/’6/2020 – Moroccan and Malian institutions should boost their cooperation and seize the numerous partnership opportunities, said newly-elected President of the National Assembly of Mali, Moussa Timbine.

Timbine received on Tuesday, June 9, the Moroccan ambassador to Bamako, Hassan Naciri, to discuss bilateral relations between Morocco and Mali, as well as various opportunities for development.

“The Kingdom of Morocco constitutes, despite the absence of physical borders with Mali, a neighbor country with which Mali maintains multiple relations,” Timbine said.

The Malian politician commended bilateral cooperation between the two countries, as well as the Moroccan economic presence in Mali, calling it “an appreciated support” for the West African country.

“All the kings of Morocco, from the independence until today, have left indelible marks in the field of cooperation and comprehension between our brotherly and friendly peoples,” Timbine continued.

Meanwhile, the Moroccan ambassador congratulated Timbine on his recent election as President of the National Assembly of Mali. Timbine was elected president of the parliamentary institution on May 11.

The two officials then discussed ways to develop bilateral relations and reviewed the evolution of partnerships in recent years.

In March 2018, a Malian delegation led by Prime Minister Soumeylou Boubeye Maiga landed in Rabat for a working and friendship visit.

During their stay in Morocco, the Malian officials met with their Moroccan counterparts and held several talks on issues of peace, security, counterterrorism, climate change, and irregular migration.

Since the visit, Moroccan-Malian partnership agreements only increased.

In January 2019, Morocco’s High Authority of Audiovisual Communication installed a center for the monitoring and control of audiovisual media in the Malian capital Bamako.

In March 2019, the two countries signed an agreement to harmonize their migration policies and promote an integrated African policy on migration. The agreement’s goal was to improve the human experience of migrants and improve their living conditions.

In February 2020, Morocco signed another cooperation agreement with Mali to strengthen partnership in the fields of housing and urban planning. The agreement aims to provide training for Malian executives and officials, based on the Moroccan expertise.

The growing cooperation between Morocco and Mali is part of the North African country’s South-South policy, aiming to support the development efforts made by African countries.

As a continental leader in several economic fields, Morocco hopes to share its development expertise with African nations to help the continent prosper and optimize the use of its natural and human resources.