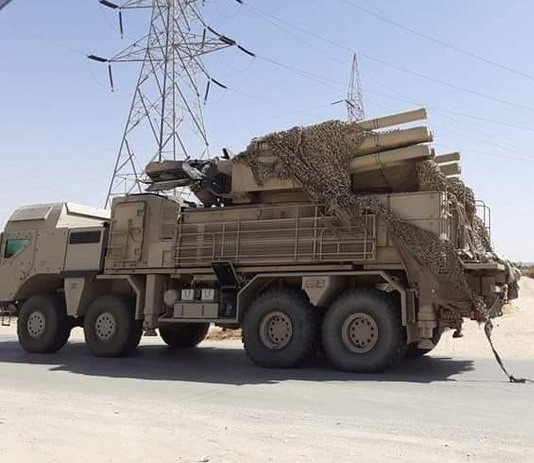 16/04/2020 – It appears the Pantsir-S1 air defence systems delivered by the United Arab Emirates (UAE) to Libya have been used to shoot down over a dozen Turkish unmanned aerial vehicles (UAVs).

This is according to unverified reports from the Libyan National Army (LNA), which said the Pantsir-S1 has destroyed 16 Turkish aircraft between November 2019 and March 2020. Some two dozen Turkish UAVs were destroyed over Libya, with the Pantsir-S1 accounting for half of them.

In the last week, the Pantsir-S1 has apparently shot down four UAVs and a Mirage F1 fighter. Video emerged showing apparent Mirage F1 wreckage on 14 April, but few other details have been forthcoming.

The Pantsir-S1 has been in Libya since June 2019, when photos emerged showing what appeared to be Libyan National Army units escorting a Pantsir-S1 air defence system near al-Jufra Air Base in central Libya. The system was fitted to a MAN SX 45 8×8 truck, which is only in service with the United Arab Emirates, according to Jane’s Defence Weekly. It apparently arrived on a UAE military transport aircraft on 18 June.

The Pantsir-S1 system (SA-22 ‘Greyhound’) was designed by the KBP Instrument Design Bureau of Tula, Russia, and is manufactured by the Ulyanovsk Mechanical Plant in Ulyanovsk. It combines two 2A38M 30 mm automatic anti-aircraft guns developed from the two-barrelled 30 mm GSh-30 gun, with twelve 57E6 surface-to-air missiles.

The Pantsir-S1 is mounted on an 8×8 vehicle and can fire at two targets simultaneously and attack 12 targets a minute. Effective range is 20 kilometres. It can engage artillery shells out to four kilometres.

Since 2014, the United Arab Emirates and Egypt have provided the LNA with military equipment, including Panthera T6, Typhoon and Caiman armoured vehicles, MiG-21 fighter aircraft and Mi-24/35P helicopters.