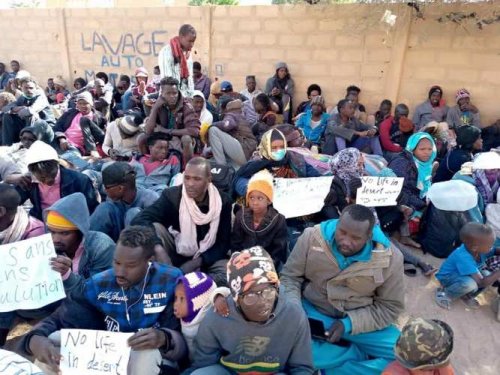 20/12/2019 – Sudanese refugees in Niger have staged a sit-in outside the UNHCR office Agadez town in central Niger to protest their tough conditions and to demand their relocation from the Sahel country.For yearsAgadez on the edge of the Sahara, has been a key stop for refugees and travellers mostly young men in search of better opportunities abroad heading north Africa countries and Europe.

In a report released in May 2019, the UNHCR estimated that 1,584 persons, mostly Sudanese, are currently registered by UNHCR in Agadez. 23.8% are minors and 126 are unaccompanied or separated children.

Rights activists from Agadez told Sudan Tribune that all the Sudanese refugees in the refugees camp 15 km outside Agadez decided to leave their camps and to stage a sit-in at the UNHCR office in the area on Monday, December 16, 2019.

Since Monday, the refugees say resolved to continue their peaceful protest until the UN refugees agency settle their situation.

Some of the refugees say they can even accept a return to their areas of origin in Darfur but they would not regain the camp.

Activists pointed out to their poor living conditions and lack of basic health service and education for the children of the refugees who are in the camp since 2017.

“There is an increase of chronic and serious diseases, there is racism, corruption, and discrimination against Sudanese refugees and other nationalities from other countries and the delay in the legal procedures for asylum,” wrote in an email sent to the Sudan Tribune on Tuesday.

Many of the Sudanese refugees fled Libya following the increase of attacks on refugees and foreigners by the various militias and armed gunmen who demand ransom for their release.