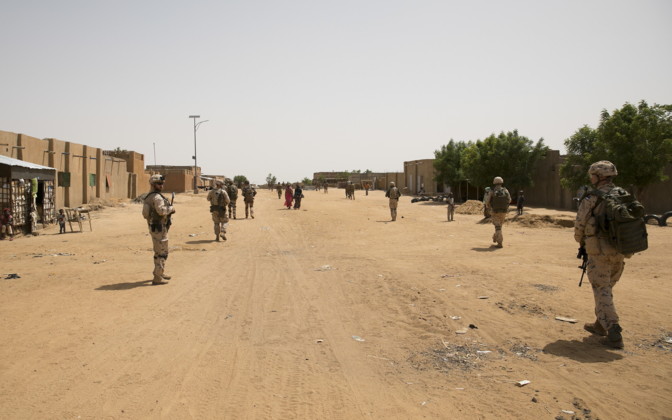 05/09/2019 – Estonia’s contingent in a French-led anti-terrorist operation in the West African country of Mali is set to double, Baltic News Service reports. The move comes as part of a wider strategy of increasing Estonian military participation in various international operations and missions.

Personnel strength had been up to 50 until now; the defense ministry is reportedly going to ask the Riigikogu if that can be almost double, to 95.

The boosted capacity would add medical and explosives disposal capabilities, which the ministry wants in order to free up the core infantry platoon to carry out troop protection tasks more independently, according to BNS.

Special operations unit(s) are also planned as part of the increase, mainly in training Malian units.

« Due to the great cooperation to date, France has made a proposal to Estonia to increase the contribution of Estonia to Operation Barkhane and to commence cooperation between special operations units in training Mali’s armed forces, » explanatory remarks in draft documents on the matter say, according to BNS.

The initiative for the move comes from the French side, which has also made similar proposals to other nations including the Nordic countries, BNS says.

The cooperation on Operation Barkhane has already strengthened Franco-Estonian relations and the two countries’ strategic relationship and military cooperation.

« Members of the French government and high-ranking military are highly appreciative of the Estonian contribution to the operation and voiced appreciation of the job done by Estonian defense personnel in the framework of the operation. Interaction between the units of the defense forces of the two countries in the ongoing military operation has increased the interoperability of the units, » the draft document explanatory remarks say, BNS reports.

« Contribution to Operation Barkhane helps to deepen the strategic relationship between Estonia and France, which in addition to the shared realm of values is based on a common understanding of the security environment and the threats affecting it. France is actively taking part in strengthening the deterrence posture of NATO by contributing its units towards greater presence of allies in the Baltic countries, including Estonia, » the remarks continued.

The Mali step-up is part of a proposed wider increase in Estonia’s military presence internationally.

According to BNS, the defence ministry is to request permission from the Riigikogu to send a further 485 Estonian troops to other global trouble spots, including Iraq and the Mediterranean. As well as cooperation with France, the missions will bring further participation in NATO and EU-led initiatives. The defence ministry also wants further Estonian personnel to be involved in the British-led Joint Expeditionary Force, which carried out large-scale exercises on the Baltic Sea through the summer.