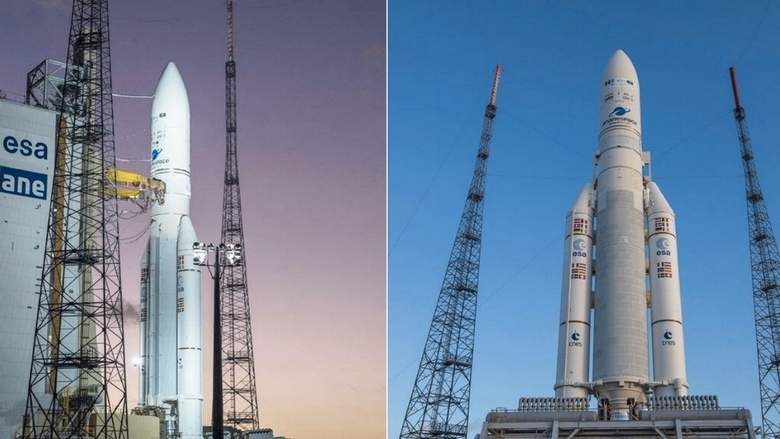 2019/06/02 – The words, “High above the clouds”, written by Crown Prince Muhammad Bin Salman, deputy premier and minister of defense, on a Saudi satellite were placed in the orbit with the successful launch of the first Saudi satellite for communications (SGS-1).

SGS-1 was launched successfully from the Guiana Space Center on an Ariane 5 rocket on Tuesday.

Minister of Energy, Industry and Mineral Resources and Chairman of the board of directors of King Abdulaziz City for Science and Technology (KACST) Khaled Al-Falih said such a spectacular national achievement has come as a result of the support provided to the Kingdom’s research and development sector by Custodian of the Two Holy Mosques King Salman and the Crown Prince.

Head of the communications team at KACST Eng. Marih Al-Shahrani said the involvement of Saudi engineers in the assembling process will help develop national cadres and transfer technology.

A member of the Saudi team, Meshal Al-Enezi, said that he and his colleagues have acquired rich experience through continuous work during the manufacturing of the first Saudi satellite, and stressed that they will invest their expertise to employ and transfer technology to the Kingdom.

The launch is part of Saudi Vision 2030, which aims at localizing strategic technologies in the Kingdom, increasing local content and enabling Saudi young people to work with advanced state-of-the-art technologies in the field of satellite development and manufacturing.

Richard Edwards, Executive Vice President of Lockheed Martin International, lauded his company’s strategic partnership with Saudi Arabia, saying, “The successful launch of this satellite is a first step in our unique partnership with King Abdulaziz City for Science and Technology and the Kingdom of Saudi Arabia, which is established on innovation, science, technology and HR development”.

The development of the satellite (SGS-1) included the qualification of a number of Saudi engineers in compliance with the qualification standards and requirements adopted by the company for its employees across all the operational phases of manufacturing and testing.

The satellite aims to employ advanced Ka-band capabilities to enable space communications at ultra-fast speeds as part of the national strategic plan to fulfill the Kingdom’s domestic requirements, provide high-specification communications services specifically custom-made for the government sector and, at a commercial level, exporting these services to the MENA region, Europe, Africa and Central Asia.

The Saudi communications satellite, which will be operated and controlled by Saudi national personnel, has a multibeam payload that provides a total throughput capacity of over 34 gigabits per second as well as highly efficient solar panels that generate power with a total capacity exceeding 20 Kw.

The SGS-1 satellite, which will be operated and controlled from ground stations based in Saudi Arabia, will serve and support the infrastructure of the telecommunications sector in the Kingdom.