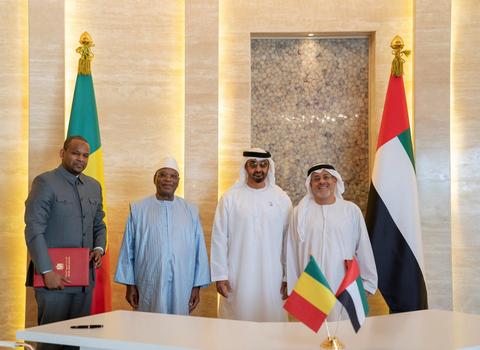 Sheikh Mohamed and Ibrahim Boubacar Keita, President of Mali, witnessed the signing ceremony between the Khalifa Fund for Enterprise Development and the Malian Government represented by the Ministry of Economy and Finance, in Abu Dhabi.

The  $25 million agreement is aimed towards providing support for micro, small- and medium-sized enterprises in the Republic of Mali.

According to the agreement signed by Hussain Jasim Al Nowais, Chairman of Khalifa Fund for Enterprise Development and Dr. Boubou Cisse, Minister of Economy and Finance in Mali, the amount will be distributed in equal instalments over the next five years.

After signing the agreement, Al Nowais said: “The agreement is a part of the UAE’s continuing efforts to support micro, small and medium enterprises in the Republic of Mali while also enabling these enterprises in generating business that are in line with the Mali Government’s efforts to promote economic development in the country.”

Al Nowais explained that the agreement provides a financial framework to support the government efforts in the Republic of Mali, which looks towards promoting a culture of entrepreneurship and supporting micro, small and medium enterprises.

Al Nowais also pointed out that Khalifa Fund is committed to move ahead in ensuring the necessary measures needed in implementing and monitoring the financed projects, as well as provide the corrective measures if necessary. He also explained the importance of joining hands with the Malian Ministry of Economy and Finance to allow young people and women the opportunity to achieve their ambitions.

Meanwhile, Dr. Cisse lauded the support that the UAE has been providing to the Republic of Mali in various fields, especially in humanitarian, economic and developmental aspects. He shared that the strong relations between the UAE and Mali reflect a shared leadership vision of the two countries across many regional and international issues.

Dr. Cisse said: “The Malian Ministry of Economy and Finance is committed to prepare the right environment needed to implement and monitor projects while also facilitating cooperation between Khalifa Fund and adjoining agencies, authorities and stakeholders, as well as supporting the implementation of all agreed programs by taking the necessary legal measures and the needed amendments to ensure the success of development projects in Mali.”