2018/08/11 – The self-styled Libyan National Army (LNA) has announced the start of military trials in eastern Libya for more than 200 people the armed group accuses of terrorism.

He said the LNA’s fight against « terrorist groups » in Benghazi and Derna – two major cities in the east of the country – is over.

Still, the announcement of military trials has sparked concern over whether the hearings will be fair, especially since they will be overseen by the LNA.

« It is hard to imagine that any of these trials will be fair and free from interference by the LNA, » Riccardo Fabiani, a geopolitical analyst at Energy Aspects, told Middle East Eye.

« The LNA was formed around a very broad definition of terrorism – so any consideration for these prisoners’ rights is likely to be at the bottom of the LNA’s priorities and, inevitably, of the courts that will try them. »

Under the command of Khalifa Haftar, a retired general who served under the ousted government of Muammar Gaddafi, the LNA has vied for greater control of territory in eastern Libya. Haftar launched his so-called Operation Dignity in 2014, allegedly aimed at targeting « Islamists » in that part of the country.

Since the beginning of that operation, over 13,000 families have fled Benghazi, Libya’s second-largest city, to other parts of Libya and abroad.

According to interviews with Human Rights Watch (HRW), armed groups – including some with links to the LNA – have seized the property of those that fled, and tortured and forcibly disappeared many of their family members that remained in Benghazi.

In February 2018, HRW reported that these armed groups had prevented thousands of internally displaced people from returning to their homes in the city, broadly accusing them of “terrorism” or “supporting terrorism”.

Haftar and his forces have been accused of war crimes in areas under their control in eastern Libya.

An ICC warrant was issued in September 2017 for a member of an elite LNA force, but calls for him to be handed over to the court have been repeatedly ignored.

Forces loyal to Haftar, one of several factions vying for power in Libya since the 2011 uprising that ended Gaddafi’s decades-long rule, have fought to gain control of territory in the country for years.

LNA forces had besieged Derna – the last remaining stronghold of opposition to Haftar’s forces in the east – since August 2016. The group launched a ground and air offensive in May this year, as part of its attempt to drive out fighters from the Derna Protection Force (DPF), a militia made up of residents of the city. 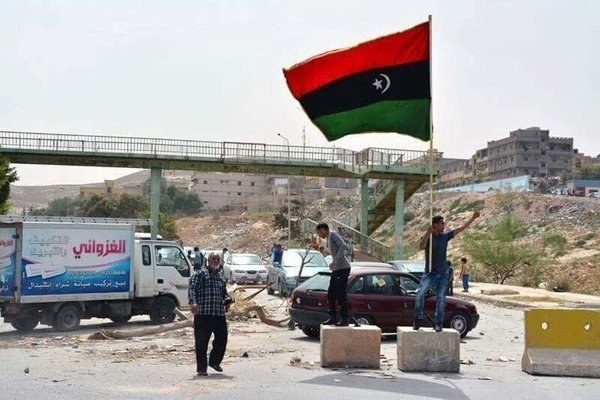 Derna residents celebrate after IS is kicked out in 2015 (Twitter)

The DPF is an offshoot of the city’s Shura Council, which has controlled the Derna since the Islamic State (IS) group was pushed out in 2015.

The LNA has long claimed that the Derna Shura Council is a « terrorist » organisation, however.

During the offensive, dozens of people were killed and up to 500 families were displaced.

“All parties to the conflict in Derna are obligated to respect the laws of war and spare civilians from harm. Anyone detained should have a judicial review of the legality of their detention, » Hanan Salah, a senior Middle East and North Africa researcher for HRW, told Middle East Eye, following the detentions.

“Commanders and prison authorities need to give clear orders ensuring the dignified and humane treatment of detainees and prohibiting torture and ill-treatment,” she added. Mismari, the LNA’s spokesperson, said this week that the group has been fighting a “difficult” battle since 2014.

He said the LNA is currently pursuing “sleeper cells” and “lone wolves” as well as carrying out security operations such as searches and arrests.

“Today we have prisons full of terrorists… We have more than 200 or 300 terrorists. They have been investigated by prosecutors and have now been referred to court, » Mismari said.

The announcement of military trials, according to Fabiani, could be a « sign of the LNA’s growing confidence that no external power can intervene and hold them accountable ».

« After all these years of reasonably successful military campaigns, the LNA faces the problem of what to do with these prisoners – a quick summary trial is a very efficient way of dealing with them. »

Still, Fabiani said there is « no plausible chance that LNA soldiers and officers will be exposed to the same degree of scrutiny » as those being referred to trial now.

« These trials will be a one-way affair, » he said.