2018/05/22 – Migration control is now “high politics” in Europe and a priority for the EU. For example, on May 2, 2018, the European Commission proposed that the budget for the management of external borders, migration and asylum – set at 13 billion euros for the period 2014-2020 – be raised to 34.9 billion euros.
The main goal is to stem migration flows by displacing the border as far as possible from EU territory. In this context, it may be worthwhile to analyse the initiatives of the new French president, Emmanuel Macron, who has vowed to weigh on EU decisions. What solutions does he propose and how can we assess them?
Hotspots in Niger
On July 27 2017, recently having been elected president, Macron spoke during a naturalisation ceremony in Orléans. He announced that France would create “hotspots” in the Sahel-Sahara region to sort out potential refugees and “economic migrants” and select the happy few who would be allowed to come to France to apply for asylum. These would established first in Agadez (Niger), and Chad, later possibly in Mali and Libya.
Macron stated that “people should live happily in their country of birth” and denounced “gullible” migrants manipulated by criminal networks who risk their lives in Libya or when crossing the Mediterranean Sea to come to Europe, yet were unlikely to ever get refugee status.
In so doing, he failed to acknowledge that leaving one’s country is a right enshrined in international law since 1948 – article 13 of the Universal Declaration of Human Rights, which states that “everyone has the right to leave any country, including his own, and to return to his country.” Moreover, African states are sovereign and not mandated to prevent emigration to Europe.
Macron’s speech also misconstrues migration dynamics in Africa. As noted in 2017 by the International Organisation for Migration (IOM) and EUDESA, Africans primarily move within the continent, where they constitute 80% of the 18 million migrants.
There are 9 million Africans in Europe compared to 20 million European citizens who moved within Europe itself. The numbers contradict alarmist projections, including that by Steven Smith, recently analysed in The Conversation.
It thus seems relevant to explain why Macron wants to sort out bona fide and mala fide migrants in Agadez and assess the implications. 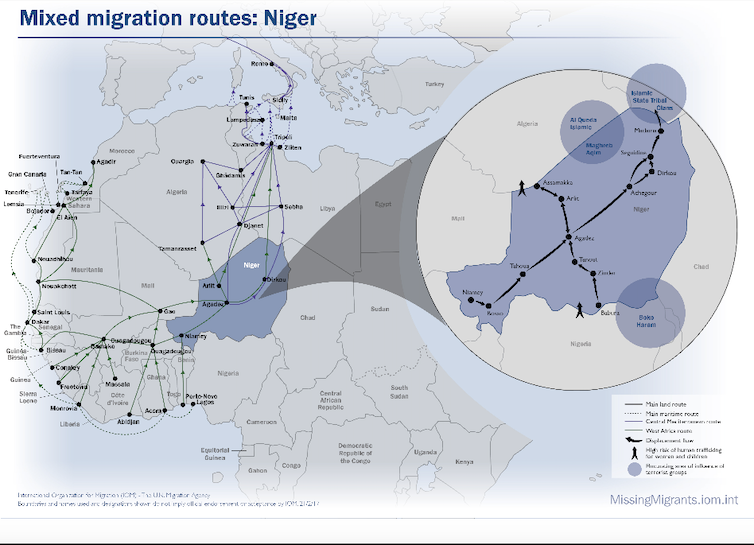 The Libyan turn
Since the 1999 EU Tampere summit, the EU has relied on certain countries bordering the Mediterranean to contain unwanted migrants. States like France and Italy wanted to reinstate Libya in this role if it could serve as a buffer state. In 2008, negotiations for the EU-Libya framework agreement on migration were launched.
But in 2011 France called for a military intervention by an international coalition to oust Libyan leader Muhammad Gaddafi. The ensuing chaos had dire consequences. In 2012, looking for a quick fix, a diplomatic mission called EUCAP was sent south of Libya, in Niger, with an annual budget of 26 million euros with the idea that it would become, in effect, the new EU border. By 2016, the EU funded an IOM information office in Agadez whose role was to persuade sub-Saharan nationals to return home if they could.
Remote control policy
Macron’s idea of a hotspot in Agadez is thus a unilateral initiative but also a continuation of the EU policy. It is part of a “remote control” policy established in the 1990s to deter the arrival of migrants on European soil.
Policy instruments have included visas, carrier sanctions, outsourcing bordering to transit and source countries, and ultimately the establishment of migrant camps in Italy and Greece. It thus reduces migration to a “problem” whose solution is a question of logistics. Setting up a centre in Agadez is typical of this technical view.
In the meantime, Macron tried to showcase a different aspect of France’s migration policies, stating that the country would welcome 3,000 refugees stranded in Niger and Chad by 2019.
In November 2017, the French asylum office known as OFPRA interviewed 72 persons pre-selected by the UN High Commissioner for Refugees (UNHCR) in Niamey (Niger) and 25 were allowed to come to France. The migrants were mainly from the Horn of Africa, including Somalia, Eritrea, and Sudan. OFPRA officers came back in February 2018 to interview an additional 84 persons.
Agadez is no haven
Agadez, a market town of 125,000 inhabitants and once a tourist destination, has for decades been a transit city for many seasonal workers or refugees heading to Libya.
After the fall of Gaddafi, the town became an important smuggling hub. The area north of Agadez is controlled by the Toubou clan and the low-paid Nigerian policemen accept money from smugglers. Agadez is now also a return hub for migrants escaping Libyan detention camps or turned away at the Algerian border. In early May 2018, the IOM reported that 1,500 persons from Cameroon or Guinea expelled from Algeria had arrived in Agadez. 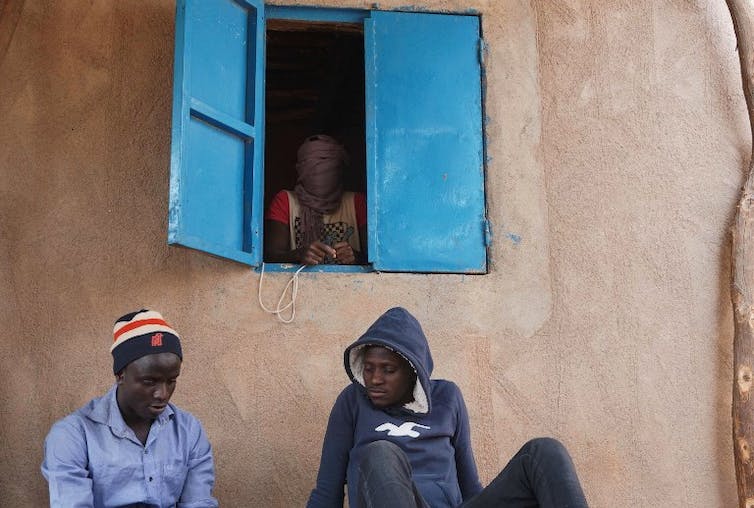 Migrants from West Africa wait at a ‘ghetto’ in Agadez, northern Niger, on April 1, 2017, to go to Libya from where they will attempt to reach Europe by crossing the Mediterranean. Issouf Sanogo/AFP

In this complex context, reactions to the French decision to set up a “hotspot” in Agadez are mixed at best. Local authorities fear that it will attract more migrants, and according to Issouf Maha, representing the Agadez regional executive, only a few of those hoping to go to France will be accepted. While migrants usually only stay a week or two and are welcome as consumers by local businesses, the longer presence of those who are turned down by French authorities could prove strenuous on resources such as water and electricity.
Civil-society actors, including human rights activist Rachid Kollo of the Cadre d’action pour la démocratie et les droits de l’homme, are also angry that local officials were not consulted. The decision to create the hotspot came directly from President Issoufou Mahamadou, whom Kollo considers to be Macron’s vassal.
Local actors think the French hotspot will bring more problems than it will solve, and also raises broader issues such as democratic legitimacy. One major question regards French interference in African affairs.
A clash of values
The French hotspot is indeed a perfect illustration of the lack of acknowledgement of African states’ sovereignty.
If Europeans can move within the EU, why shouldn’t African citizens be able to move within their own region? In fact, in 1979, the Economic Community of West African States (ECOWAS) adopted a protocol on the “free movement of persons, residence and establishment” and an additional protocol in 1986 that implies that the citizens of the fifteen ECOWAS member states who travel and stay in Agadez do so freely and legally. ECOWAS migrants who will not be selected to go to France by French authorities should thus be detained or expelled from Niger.
Besides, the French attitude toward some populations fleeing to Agadez is ambiguous. For instance, Sudanese fleeing an internationally recognised criminal regime are stopped at the border by Janjaweed militiamen who participated in war crimes in Darfur. They are now part of the official border authority in Sudan under the name Rapid Support Forces and are even supported by the EU. In 2017, some of these Sudanese border guards even came to detention centres for irregular migrants in France to look for regime dissidents. So what will happen to the Sudanese who apply to go seek asylum in France at the Agadez “hotspot”?

The Conversation/Photo: A refugee family who was evacuated from Libya leave an UNHCR office in Niamey, on November 17, 2017, after being interviewed by protection officers of the French Office of Protection Refugees and Stateless Persons (OFPRA). Sia Kambou/AFP
Sahel-Elite